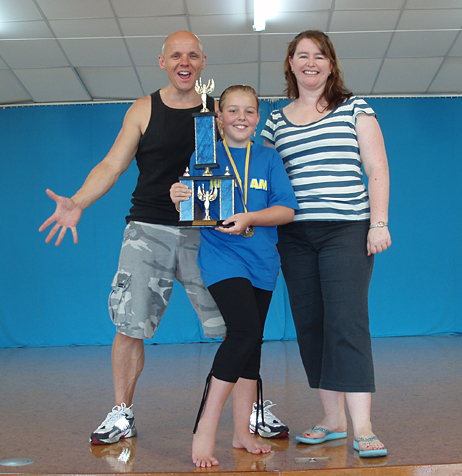 Stephanie Ferguson – I Was Going To Do It!

How it all started with Jump Jam Idol: our teacher (Miss McNae) picked out some of the kids out of an aerobics team. She told us that we were chosen to go to this Student Leader Course. We were all excited about it! This was a chance to extend our leadership skills in jj. It was held in our School hall, there were heaps of kids there from all over Auckland it was packed! We did two sessions of practising our technique and cues! Then at the end Rebecca called us in and told all of us that a competition was coming to town and it was called Jump Jam Idol! And I entered! And so did 2 of my other friends, Lauren and Holly.

How I reacted to entering: I was excited and nervous about it all. What did I have to do, when, where, how? A lot of uncertainty was running through my mind. But my friends, teacher and my parents were great, they all encouraged me and I became more confident. I WAS GOING TO DO IT! Yes!

So next we had to: Take all that info that Rebecca gave us and work at it really hard. So I practiced every day for two weeks and then Miss McNae filmed me doing “HUNG UP”! and this was sent in for the competition.

2 weeks later: I was just working like we normally do at school and then Lauren came rushing in, and said to find Holly, Miss McNae has some important news so we ran to Miss McNae and she said “you guys have made the top ten and are going to Christchurch for the Jump Jam Idol!” We were screaming our heads off we were so happy and we were ringing our mums and jumping about with excitement, it was a great moment!

The Practising: We were all practising so hard we were killing ourselves but it felt great! We practiced a lot at school, but our school also had a gala and we all did our routine on the back of my Dad’s truck (it was the stage), so people watched and it was good way to practice in front of different people. I also practiced at my Mum’s local gym, we went up once a week so I could practice on the stage.

The Competition Day: Off to Christchurch we went! I’d never been to Christchurch! So we were all totally excited about the trip and the competition, but we had to keep focus! So, the day arrived at Shirley Intermediate, and one by one, each competitor did their routine … and then it was my turn … my butterflies in my stomach were bursting to get out, but I got up on stage and managed to do Hung Up the best I could and I, Stephanie Ferguson came First place for the year 4 to 6! I won an Ipod, a HUGE Trophy and a medal! This could not have got better! I couldn’t stop smiling! All that hard work had paid off! I was so proud of myself! And so was EVERYONE else! It was fantastic! My friends; Lauren got 2nd and Holly 5th. So our trip to Christchurch was a huge success! We went out that night for dinner to celebrate!

Back home: The phone was running hot with congratulations! When we went to school, we were represented with our trophies at school assembly, it was written about in the newsletter, our names were on the outside board by the school gates and our local newspaper wrote about us as well! I felt like a star!

The Great News: A couple of weeks after the competition, we got a visit from Brett and he wanted to use myself, Lauren and Holly on the new release for jump jam, we were so excited. We had to do heaps more practise but it was worth it, Brett came up and filmed us at school. But wait there’s more …. it was not over! Brett then asked me and Jenny the girl who came first in the year 7 and 8’s to be on the new release for jump jam 12! How awesome was that! Filming would be in January, so of course I jumped at the chance! So I had to learn another 7 routines! Brett did some coaching with me and I then had to practice, practice, practice to know them inside out for filming in January.

BUT IT DIDN’T STOP THERE!!!!!!: Jenny was going to stay with my mum and me (we came back from our holiday). So the first day was spent going over all the routines and the 2nd day we organised costumes, and had our hair and makeup done and then the filming began and it was great! It went really well and Brett was encouraging us and we had heaps of fun and laughs! I was stuffed!

My Final Saying is: Jump Jam is a great fun way to keep you fit! Jump jam has boosted my confidence and helped me with all my dancing! But the best thing is anybody can do it and that is the best thing about it!!!!!!!!! So thank you so much Miss McNae, my Parents and especially you Brett you have changed my life for ever and I will never, ever forget this opportunity that you have given me!